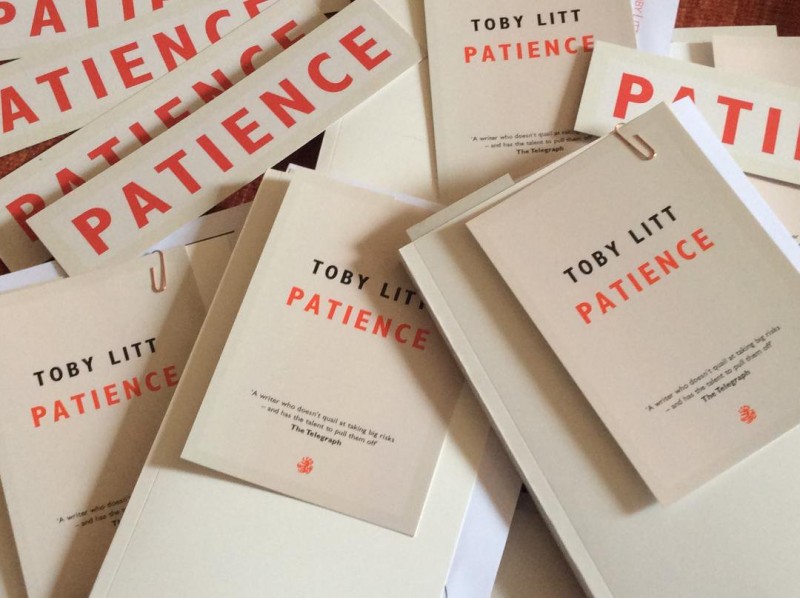 In this blog post, Toby Litt writes about small presses and celebration.

It’s very hard to write about celebration. Try it, and you will probably end up sounding like you’re saying nothing. ‘There were some people, and they were very happy.’ Not good. ‘They hugged Yay, they said.’ Nothing except bathos there.

But I can’t write about small presses without writing about celebration, and more specifically, about the particular quality of celebration associated with them.

Both Secker and Hamish Hamilton were miniscule demesnes of literariness within vast empires of cookery, celebrity and backlist. In many ways, both imprints saw themselves as small presses. They felt endangered, inside the corporate structure, just as genuine small presses do inside the wider books industry. In order to keep their independence, or even to survive, they needed to up the prestige of the larger brand on a regular basis. Simon Prosser, my editor at Hamish Hamilton, started off by publishing Zadie Smith’s White Teeth, and everyone higher up at Penguin was happy. Until the following year, when they looked down upon him and expected the same again. It’s a tribute to him that, by and large, he has managed to keep up his hit rate – and to keep Hamish Hamilton going. His Booker Prize win, with Bernadine Evaristo (an author he has supported for years), will ensure this continues for a few years more.

But literary imprints within corporate publishers aren’t really small presses. They don’t have the reckless independence of, say, Fitzcarraldo (publishers of Nobel laureates Svetlana Alexievich and Olga Tokarczuck) or Oneworld (publishers of Booker Prizewinners Paul Beatty and Marlon James). Decisions on which books to publish are often taken out of the individual editor’s hands. At acquisition meetings, there will not only be literary editors, there will also be representatives from marketing and from accounts. Many dubious people will be at the long table in the glass-walled meeting room. It is their job to say no, on very sensible grounds. This author hasn’t sold before; it is they will unlikely to sell now; next. That the author has written a great book – one worth celebrating – doesn’t mean much to them. That the editor believes this passionately will only sway them now and again, if that editor is on a run of big wins. And so those great books end up being declined by corporate publishers and offered to small presses, who reasonably often take them on.

Smaller presses take bigger risks. They can obey hunches that corporate structures don’t perceive, because they can’t be spreadsheeted. They can also go bust a lot more easily. Two flops and they’re out. Or, conversely, they can grow so successful, and exhaust their founders so completely, that they are themselves are acquired by bigger publishers. (For example, Virago and Harvill Press.)

The editors of Galley Beggar – Sam Jordison and Elly Millar – recently followed their hunch and took a big risk on a big book, Lucy Ellmann’s Ducks, Newburyport. It has been reviewed as a major work of fiction, one of the most significant of the millennia, and was Booker shortlisted. There was a party, on the night of the announcement, to celebrate this achievement. And although Ducks, Newburyport didn’t win, it was a real celebration – shared with many of the other Galley Beggar authors: Paul Ewen, Preti Taneja, Paul Stanbridge, Alex Pheby.

Sam and Elly are not only the editors, they are also the owners, accountants, publicists and book-packers of Galley Beggar. They are physically involved with the completion and distribution of their books. They bend over their laptops, giving serious consideration to the inclusion or deletion of this or that comma. Months later, they are wheeling piles of chunky envelopes containing finished copies of the book to the post office.

When Sam and Elly celebrate with their authors, they really celebrate with their authors. A great review in a widely read newspaper or by a hugely followed book blogger is a major thing for them. They are delighted that someone shares their view of the book they published, but they’re also hoping to clear some of those dozen cardboard boxes of freshly printed stock from their dining room. (And also, when there’s commisseration to be done, they are really there, because they’re feeling miserable too.)

In the way they’ve published my novel, Patience, I’ve seen a quality of engagement, passion and commitment that is humbling. Galley Beggar publish books to celebrate them – there’s no other explanation for how completely and utterly they’ve allowed their lives to be taken over.

It’s not that editors at corporate publishers don’t feel the same joys and disappointments. But they’re not physically and financially involved in the same way, and so I think they’re not as emotionally involved. Not in my experience. It’s not their dining room the unsold copies are squatting in. A great review is nice but if this book doesn’t succeed, maybe the next one will, or the one after that. The editors haven’t bet their own mortgage on it. And it’s quite possible that the only copies of the book they’ve handled are the presentation copies in their office.

Toby Litt was born in 1968 and grew up in Ampthill, Bedfordshire. He is the author of ten novels and four short story collections – among them Corpsing and Ghost Story. His most recent novel is Patience, published by Galley Beggar. Toby teaches creative writing at Birkbeck, University of London.

Is your press missing?

Click here to find out how to add your press...